Born Feb 1973 in Amherstburg Ontario, Doug currently lives in Milton, Ontario with his fiancé Megan Fournier. He grew up on his father’s farm where he learned the lesson that hard work pays off, which led him to work as a heavy equipment operator and mechanic for 30 years. After an accident left him with permanent damage to his knee, he spent time at Trios College and graduated with a diploma in Supply Chain Logistics and Management in 2018. In the same year, Doug began working for the newly opened Mohawk Casino and rose to the role he still holds of Dual Rate Supervisor.

Doug began LARPing in his late twenties when Fantasy Alive first opened up. Since then he stepped up and purchased the game in 2006 from its original creator, Brett Moore, and has run it to this day. While as Owner of Fantasy Alive, especially in the early years, his willingness to work hard and put his full effort forward helped greatly with running Fantasy Alive. Much of the work to run the game was done by Doug himself as he had very little help. This means he took on many roles such as Head of Plot for three years and has always had an active hand in the plot and story of the game. At the same time he ran the logistics, organization and, for the last eight years, the full meal plan. Doug still enjoys the work of Fantasy Alive but has brought in others to assist as with the growth of the game, he simply couldn’t keep up with all the work himself.

In his spare time, Doug enjoys tabletop games with friends, both playing and running them.

When Doug bought Fantasy Alive he did so to ensure that something which brought him joy he could then share with others. Through the years there were financial, emotional and social struggles, but Doug persevered to create a game where he gets to see the smiles on people’s faces as they share in the same joy. It was this honest goal that slowly spread by word of mouth to begin and continue the growth of Fantasy Alive. 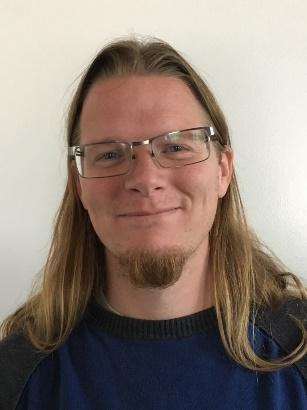 Born May 1981 in Ajax, Ontario, Ian spent most of his childhood in the Durham region at the east end of the Greater Toronto Area. He moved to Ottawa, Ontario to attend Carleton University and graduated with a B.A. in Environmental Studies in 2005. Ian married Meghan Young in 2004 and they now have three children, Malcolm (2008) and twins Rosalynn and Nathanael (2011). After some moving around to accommodate his growing family, Ian has now settled in Ottawa where Meghan is a Presbyterian minister at St. Stephen’s church. Ian has spent most of his time since marriage being a stay-at-home dad, but now that the children are older, has taken on the job of Office Administrator at St. Stephen’s since Fall 2019.

Ian was introduced to the fantasy genre at the age of 10 by the Forgotten Realms and Dragonlance series of books and his love of the genre has never waivered since. He was introduced to tabletop games with 2nd Edition Dungeons and Dragons and has since played various systems over the years, including some created by friends. Ian first started LARPing in high school at the age of 17 and has participated in various games since that time. He started playing Fantasy Alive shortly after its creation and has missed very few events since. During his time at Fantasy Alive and other LARPs, Ian has taken on most roles including: Head of Plot for 2 years at Fantasy Alive, Casting at various times and for 1 full year at once, working on LARP rulebooks for a total of 11 years, and playing a variety of characters for the majority of the time.

Ian was approached by Doug Rene to buy into a partnership with Fantasy Alive in 2016 after slowly taking on more work and leadership roles within Fantasy Alive over the years. After consideration and negotiation, Ian bought into Fantasy Alive because he found himself with the same vision as Doug. They both loved Fantasy Alive and saw the game as an amazing opportunity to take something they enjoyed and were good at, and spread that enjoyment to more people. Since that time Ian has worked closely with Doug to formalize the ideals and methods of the company to develop and make all the games more accessible and spread the joy. To continue this effort, he and Doug have formalized their company into Endless Adventures Ontario.

In his spare time, Ian currently plays online tabletop games on a regular basis and joins his children for video games and board games. He also enjoys spending time at his family cottage he has been going to since he was a child.

The Plot manager position is designed to run and organize the Plot Team and story of all Fantasy Alive games on a continued basis so that FA can better track continuity and fund props for mods and story, increasing the quality of the game. You can see more details of the position here.

This position is responsible for editing and updating the official rulebook as well as answering rules questions. You can see more details of the position here.

This position is responsible for providing support to all players and all positions within EAO. They will generally assist players by bringing their concerns to the proper person to be handled, but they may also remain within the discussion of the issue if requested by any of the parties involved.

This position is responsible for maintaining, updating and collecting information for EAO’s web spaces.

This position is responsible for ensuring the participants in EAOs online spaces adhere to the Code of Conduct and other rules for online spaces.

This position is responsible for the organization and execution for attendance of EAO at conventions and exhibits.

This position is responsible for managing Lore entries and organization of the Fantasy Alive Wiki. You can read more about this position here.

These positions are responsible for ensuring the safety of all weapons used at each event, ensuring armour physical representations used at events are safe and properly counted for Armour Points and  answering questions and aiding the other positions in following of the rules.  You can read about our Rules Marshals, our Weapons Marshals, and our Armour Marshals.

This position is responsible for responding to questions sent to the new player email account and providing a meeting before each event for new players to be briefed on the game aspects and ask any questions they have.

These positions are responsible for ensuring the setup and cleaning up of the main spaces used by Fantasy Alive at events, the Tavern and Cast Cabin.

These positions are responsible for reviewing character histories sent in by players to ensure they are suitable within the game world. They also work to file these histories in a Wiki for Plot reference and provide their assessment for Logistics to provide XP.

These positions are responsible for checking the first aid kits kept at the game to ensure they are always properly stocked.